A family called Margolin were behind the Dansette, originally an immigrant to the U.K. from Russia, Morris Margolin set up as a Cabinet Maker in London. He also imported musical instruments and so perhaps it was this general interest in music that led him to produce the  first electric record player made in the U.K. the ‘Plus-A-Gram’ in 1934. The first Radiograms had been available for a decade when Margolin combined his cabinet making skills and musical interests to produce a turntable that could be plugged into the back of some radios to utilise their speaker and amplification, in effect inventing the first ‘Hi-Fi’ separates! Up until this point Radiograms were incredibly bulky and expensive to the point of excluding anyone from ownership but the most wealthy. Margolin’s inventiveness made what was in effect a Radiogram of two parts, though still expensive by anyone’s standards the Plus-A-Gram was now at least within the reach of a growing middle class. Within six years it would be the only thing they would make in their workshop.

The development of an autochanger by BSR a British, Birmingham based company, meant that the Margolins would create and offer their first Dansette branded player, the Senior in 1950/51. It proved incredibly popular and the company developed into one with a staff of hundreds and a very healthy turnover; exploiting the market for a cheaper alternative to the large furniture based Radiogram style systems of companies like HMV, Blaupunkt and Bush. The product exceeded everyone’s expectations and the workforce had to be re-housed in a larger factory in Stanmore, Middlesex, around 1962.

The Dansette became a household name in the late 1950s and 60s when the British music industry shot up in popularity after the arrival of rock'n'roll. Teenagers would have used various Dansette players to take to and from parties to listen to the latest records.

A Dansette was a common sight in many British households during the 1960s and is a statement and artifact of the vibrant, popular youth culture which developed during the period.

The Dansette was a versatile machine with many being equipped to play 7", 10" and 12" discs at 78, 45, 33⅓ speeds. Larger models such as the Bermuda could be fitted with optional legs for home use, while the Viva, Junior and Diplomat models were designed to be transportable, with a handle and studs affixed to the side of the case and latches to secure the protective lid. Like almost all record players of the day, they had built-in speakers. Some models of Dansette record players had a BSR autochanger allowing several records to be loaded at once, and played in succession.

Even though Dansette players were expensive, some experts and fans argue that the players were overrated. Despite this, the Dansette brand outsold other makes such as Fidelity, Bush, Alba, Ferguson and others.

Dansette set a standard look for all portable record players of the time - a latched lid on top, a speaker and control knobs on the front, and sometimes a carrying handle.

The very first model available in 1950/51 was the Plus-a-Gram and the Senior, these were very expensive and many teens and adults could not afford record players until later. It retailed at 33 guineas which today would be approximately £800. In 1962 a Dansette Popular 4 speed record player would be sold for 11 guineas and for another 2 guineas you could opt for the Bermuda with a 4 speed autochanger and with legs as an optional extra. Despite this, many teenagers acquired one, taking them to parties, and purchasing the latest singles (45s). Many Dansettes were sold in December as Christmas presents, but the majority would be purchased with the then readily available 'hire purchase'. In 1958, Dansette started producing the Dansette Junior and later the De Luxe and Conquest designed to appeal to the teenagers who would take them to and from parties.

By the late 1960s, recording techniques were becoming more sophisticated. Stereo had been virtually ignored until then and there was a change of direction from the 45's to the LP. Customers began to seek more modern hi-fi systems. Samuel Margolin later stated: "Inevitably the market dried up for record players. Imports from Japan took over the market with cut-throat competition and the company went into liquidation.″ Dansette production ended in December 1969, following the introduction of relatively cheap and efficient Japanese and other Far Eastern imported Hi-Fi equipment. The Rank Organisation took over the Dansette brand name, but the glory days were over and the name quickly disappeared.

Adapted from the Wikipedia entry and the BigMikeyDread blog. Apologies for any factual errors. Ads are from various sources on the internet. 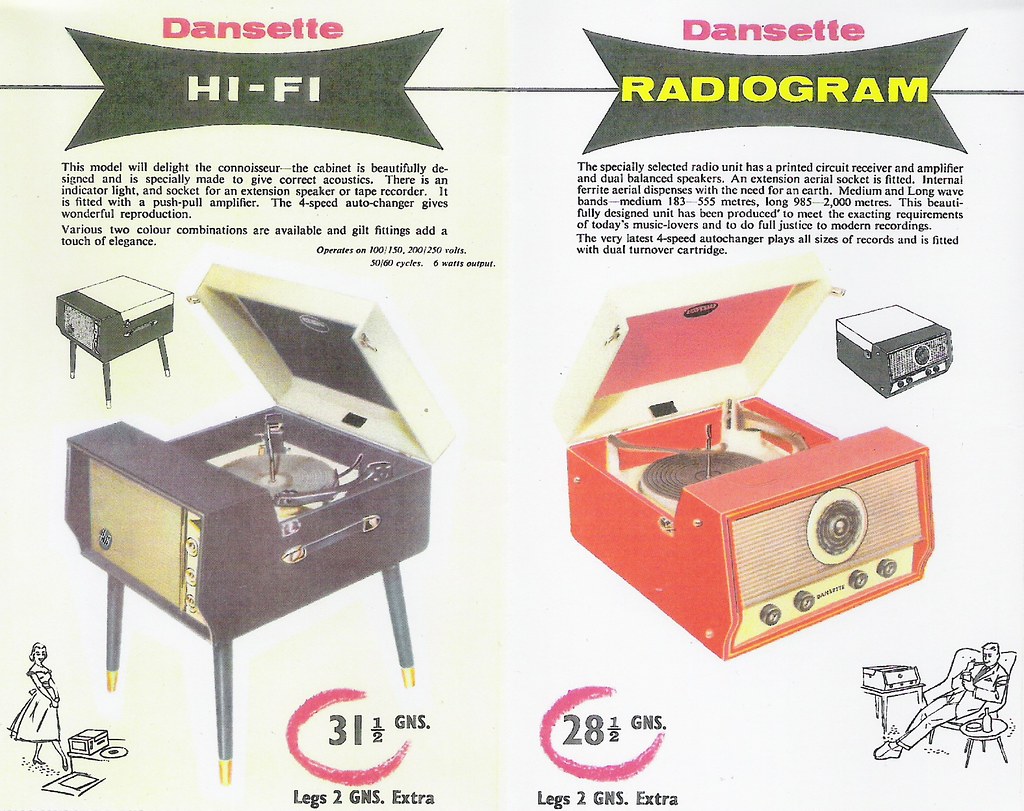 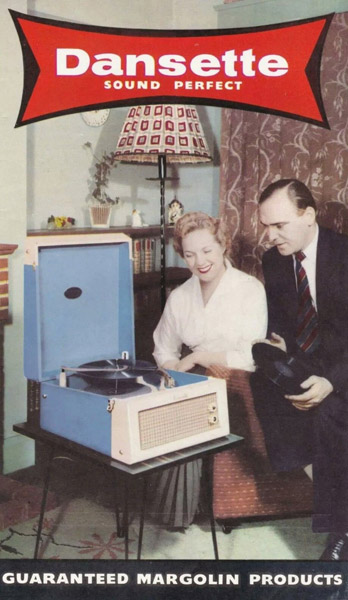 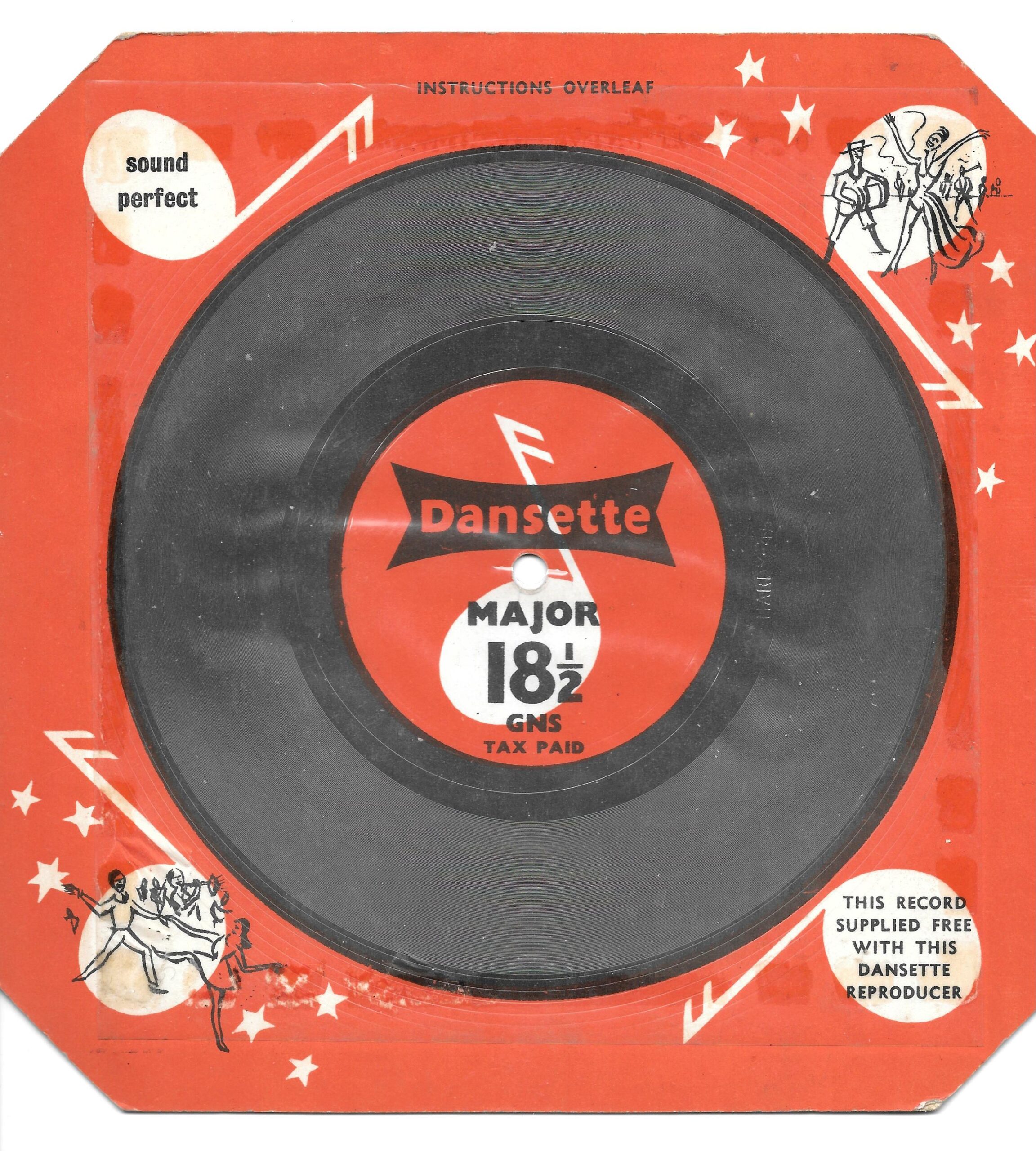 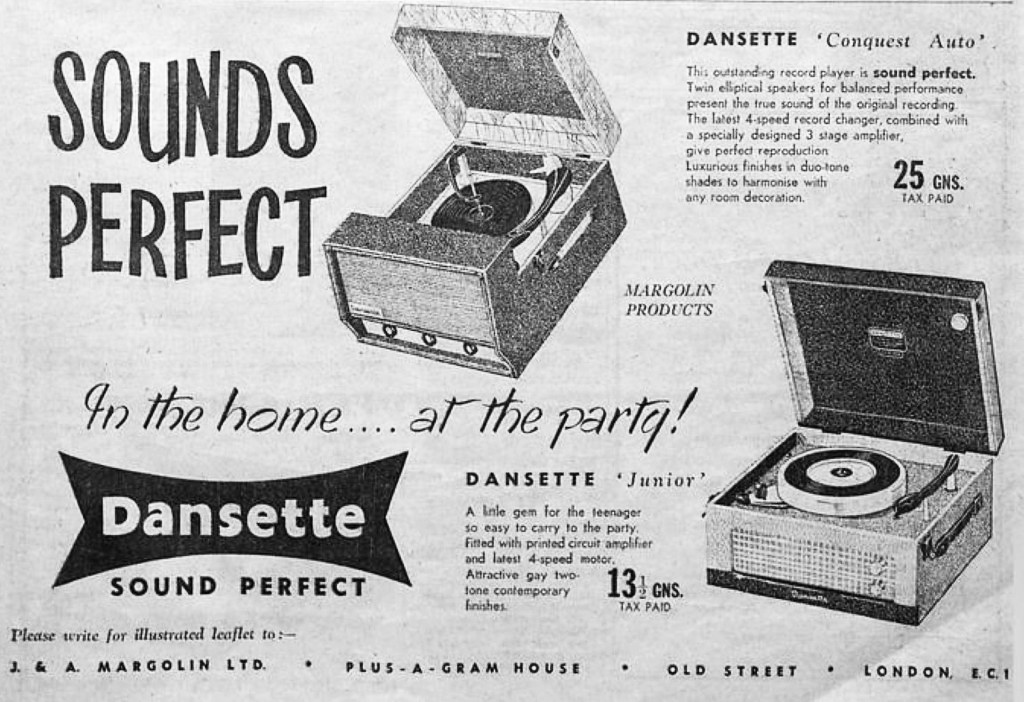 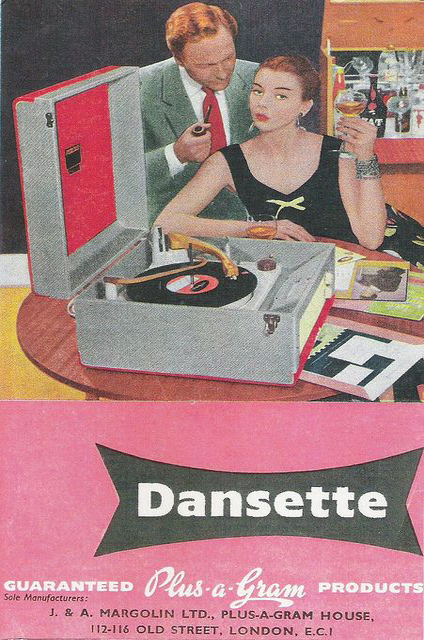 We use cookies on our website to give you the most relevant experience by remembering your preferences and repeat visits. By clicking “Accept All”, you consent to the use of ALL the cookies. However, you may visit "Cookie Settings" to provide a controlled consent.
SettingsAccept All
Manage consent

This website uses cookies to improve your experience while you navigate through the website. Out of these, the cookies that are categorized as necessary are stored on your browser as they are essential for the working of basic functionalities of the website. We also use third-party cookies that help us analyze and understand how you use this website. These cookies will be stored in your browser only with your consent. You also have the option to opt-out of these cookies. But opting out of some of these cookies may affect your browsing experience.
Necessary Always Enabled
Necessary cookies are absolutely essential for the website to function properly. These cookies ensure basic functionalities and security features of the website, anonymously.
Functional
Functional cookies help to perform certain functionalities like sharing the content of the website on social media platforms, collect feedbacks, and other third-party features.
Performance
Performance cookies are used to understand and analyze the key performance indexes of the website which helps in delivering a better user experience for the visitors.
Analytics
Analytical cookies are used to understand how visitors interact with the website. These cookies help provide information on metrics the number of visitors, bounce rate, traffic source, etc.
Advertisement
Advertisement cookies are used to provide visitors with relevant ads and marketing campaigns. These cookies track visitors across websites and collect information to provide customized ads.
Others
Other uncategorized cookies are those that are being analyzed and have not been classified into a category as yet.
SAVE & ACCEPT